Scandinavia has it all. Its cities are as breathtaking as its coastline, the summer nights seem to last all day - literally, if you go far enough north - and life is both cultural and wild in abundance.

Copenhagen is a city with a personality that belies the stereotypical view of the Danish as quietly sitting on the north coast, waiting for everything to happen elsewhere. It has a long tradition of music and drama, and some of the world's most famous scientists have been Danish.

Sweden is the heart of this area, with everything from fine cuisine to exquisite architecture, and all manner of culture. Finland is the open secret that takes everyone by surprise - lively, bright and young, it is vivid with personality.

And Norway has a coastline that simply defies belief. Soaring glaciers and bottomless fjords populated by seals, dolphins and, if you're lucky, whales or bears to be spotted.

It's even worth visiting in winter - the icy passages and snowy hillsides make stunning vistas, and you could even catch that most eye-popping phenomenon, the Aurora Borealis.

On shore, the food is as good as aboard your ship, while the entertainment and sightseeing are unmissable.

We may have had our heads turned recently by the dark, brooding Scandi-dramas on TV, but the area is much more than the latest noir-hotspot. It is as flourishing and friendly as it is apparently reserved, and offers you a trip that's as attractive as anything you could wish for. 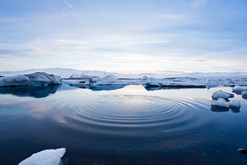 Many of the major cruise lines visit Scandinavia, with ships such as the Regent Voyager, only the second all-suite, all-balcony vessel in commission, with the largest ‘lead-in’ suites in the industry. Similarly, the Emerald Princess, a truly spectacular and beautifully appointed ship, is one of the most glamorous and stylish ways to travel in Europe. Or the Azura, one of the largest ships in P&O's fleet, offers sumptuous and social travelling, with an atrium that stretches over three decks and the first ever Michelin starred restaurant at sea.